following the footsteps of Sakya Pandita, a revisit of the North Silk Road in connection with Tibet.

The Peace Negotiation in 1247

Liangzhou (Wuwei) is an open plain, unusually flat and fertile, therefore not surprisingly had been taken in rotations by the Yuezhi, Hungs, Tanguts, Tibetans, Chinese, and Mongolians in history. This part of the Silk Road had always been an interlocking war zone.

Sakya Pandita arrived in Liangzhou / Wuwei, the royal camp of Godan Khan in 1244 at the senior age of 63, passed away here in 1251 when he was 70. He was invited by the Mongolian ruler to the peace negotiation.

The Mongols had attacked a few places in Tibet, and now they demanded a treaty and submission. From the history, we have learned that it had been a very effective Mongolian militant strategy in their conquering of the world at the time. The pattern for the far-reaching places went like this: terror strikes of a few important places, summon for submission, select and support a ruling agent, install a system of ranking / titles granting, household registration and taxation, then in today’s terminology, a “genuine autonomy” for those who had submitted, while the exemplars of retaliation to those who refused to submit were made to known.

In this case, the Prince Godan was keen on searching a spiritual teacher too. Sakya Pandita, the most learned, was chosen as the intermediator for the negotiation and Dharma teacher.

So Sakya Pandita was here, to test the water for his fellow countrymen. By the time of the meeting at 13th century, the great Tibetan empire built by their expansionist ancestors had been dissolved into many scattered regimes, which were preoccupied on the path to the spiritual attainments and weak as the result of the intertwined power struggles among themselves, until the invasion came at the door.

In his famous letter to the home country when he was in Liangzhou, Sakya Pandita wrote about the Mongolian strategy, referring to the treatment of the groups who had submitted and those who had tried to fox out or resist. (That second paragraph of his letter was pretty much felt like a paraphrase of the Khan’s words). Therefore, he suggested the submission, even gave a tip or two about what kind of presents would be favored among the powerful and aristocratic in Yuan court.

His nephew, Sakya Drogon Chogyal Phagpa / ས་སྐྱ་འགྲོ་མགོན་ཆོས་རྒྱལ་ཕགས་པ། 八思巴, who had accompanied the Pandita here when he was ten, later became a more influential character in history. He had yielded the greater influences in the Yuan court, moving further from a mere Choe-Yong / མཆོད་ཡོན། (priest – patron) relationship with the emperors in their state building. He was titled as the State Preceptor, created the Mongolian scripts based on Tibetan writing forms, and picked the location and designed for the capital of Yuan Dynasty, Dadu (Beijing), among many other things. A Dharma teacher, scholar and strategist, he was entrusted by the Yuan Emperor Kublai Khan to rule all of Tibet, and the Buddhist affairs of the country. 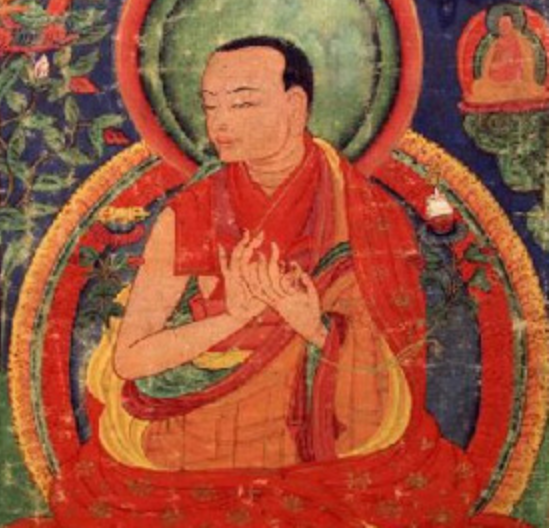 In 1251, when the Sakya Pandita passed away, the Godan Khan built a Pagoda of 35 meters high to commemorate him. The site later expanded into a large monastery with over 1000 monks, many temples, halls and Pagodas. In 1927 an earthquake destructed some of the main structures. One record said the monastery was tore down since 1967. The present Temple garden is a recent renovation.

The place was now organized as a site of commemoration, patriotic education, and tourist site. The open yard with pagodas was empty and quiet at the time of our visiting. We joked, what a waste! If such a collection of holy stupas were anywhere near our vicinity of Tibetan homeland, they would have been circled non-stop, stained from the hundred- year touches with heads and hands. The prayer wheels would have been built along them, turned and creaked even with lubricate oil added to their bearings, the prayers flags hung, the incense burnt, the lamps lighted and the stone around the stupas carved from the prostrations by the pilgrims.

Some sites to visit in Wuwei:

Wuwei Xixia Museum, with amazing collection of Xixia (Tangut / Minyak) writings, a great place to get snap-shot demonstration of the ancient Tangut (Western Xia) Kingdom, once ruled over a significant part of today’s Gansu, Ningxia and Shanxi provinces with advanced civilization.

Kumarajeva Temple, built in early 5thcentury to commemorate Kumarajeva from Kucha Kingdom, one of the greatest Dharma translators in Chinese history.

And outside of the city:

The Temple of Golden Pagoda / ལྷོ་དབང་སྡེ།

Lianhuashan, / ནུབ་པདྨོ་སྡེ། 莲花山寺，a mountain-top temple expanded by Sakya Pandita, and a regular site of Dhama teachings and Prayer meetings headed by Kumarajeva during his 17-year stay in Liangzhou. Great for a hike with panoramic view of the city.

Tiantishan Cave, with a history of 1600 years.

Our next destination is Zhangye.

Lhasa to Mt. Kailash: journey with a NatGeo explorer (Day 2)

Lhasa to Mt. Kailash: journey with a NatGeo explorer TEAM